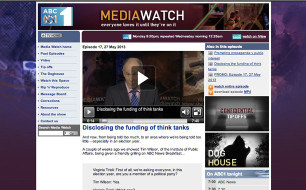 Of these eight, CPD is one of only three which have a policy of disclosing funders (other than small, individual funders who wish to remain anonymous).

Media Watch researchers put a list of searching questions to each think tank, and published the responses on its website. Miriam Lyons’s original response on behalf of CPD, alongside responses from the McKell Institute, Grattan Institute, Centre for Independent Studies, Sydney Institute, The Australia Institute and Per Capita, while the Institute of Public Affairs’ brief reply is summarised in the transcript.

Read the full transcript and play back the segment: abc.net.au/mediawatch/transcripts/s3768536.htm