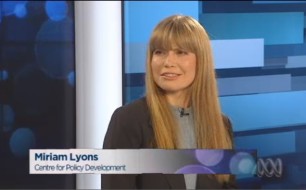 Miriam debunked the assertion that most refugees by boat were ‘economic migrants’, as having no supporting evidence. The panel also addressed proposed changes to fringe benefits tax, memoirs from Julia Gillard and Simon Cox of The Economist joined to discuss the future of Australia’s economy as China’s growth slows.

Watch the episode on the ABC