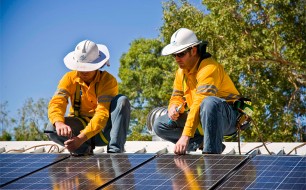 Electricity prices have been on the rise for all consumers.

The blame is often placed on solar users but a large increase in costs is due to air conditioner use. Laura Eadie, CPD’s sustainable economy research director recently released Getting the facts right on Solar a report that looks at what is really driving higher electricity networks costs. Laura spoke to Stan Thomson broadcast on 891 ABC Adelaide about her findings.

“…adding a single air conditioner adds about $2400 of investment need to the electricity networks and once that investment is made that is recovered from all consumers.”

Getting the facts right on Solar shows that adding rooftop solar to the network reduces bills faced by other households due to air-conditioning.

Listen to Stan and Laura: