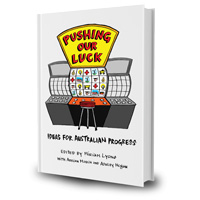 Review of Pushing our luck by Ray Broomhill.

Australian Options is published by a registered non profit subscriber owned Association – Australian Options Publishing Inc. The journal was “launched on the basis of positive responses to letters sent out by a group of Adelaide people who felt the need for an open discussion journal of the left.” The author of this review is Adjunct Associate Professor, Australian Workplace Innovation and Social Research Centre, University of Adelaide.

Edition No.75 also includes a great excerpt from the CPD book, edited by Miriam Lyons. Over the past few years the Sydney based ‘think tank’, the Centre for Policy Development (CPD), has emerged as one of Australia’s leading sources for progressive policy ideas and research. Pushing our Luck is a collection of ten essays published by the CPD on some of our most important ‘big policy issues’ that Australia currently faces.

The essays cover a range of policy topics. Chapters on taxation policy, the Gonski education reforms, the health system, industrial relations, welfare policy and climate change present critiques of some of the current policy issues at the federal level. Other chapters attempt to focus on future directions including where growth will come from in the future, how to build a more resilient economy and how to counteract the next outburst of neoliberal ‘culture wars‘. Each chapter critiques current debates on the topic and concludes with a discussion of ‘ideas we need now’ in which the authors attempt to lay out some progressive proposals that can easily be fed into current debates. They also attempt to identify and challenge the key obstacles to such ideas being adopted.

In my view, the outstanding chapter in the book is on taxation policy. Here, Adrian March, Miriam Lyons, Adam Stebbing and Shaun Wilson provide an excellent discussion of the case for increasing government revenue. With admirable clarity they debunk the myths associated with neoliberal arguments in favour of tax cuts. They demonstrate that Australia has a tax regime that not only falls short of raising the revenue required but which is grossly unfair. They document tax breaks (overwhelmingly favouring the wealthy) that cost the government $111 billion in revenue in 2011-12. Superannuation concessions alone cost the budget $30 billion.

One of the things that stands out in these analyses of current policy issues is the contrast they provide to the strident neoliberal discourse that we have been subjected to in the recent past within the political arena but particularly in the Murdoch dominated media. These are by no means radical proposals but they marshall coherent evidence and rational argument to provide alternatives to the dominant neoliberal world view that is so enthusiastically embraced by the new Coalition government (and often reluctantly by Labor as well).

Most of the essays have been given a last minute revision to incorporate at least some analysis of the impact of the election of the Abbott government in the latter part of 2013. Not surprisingly, the authors do not see the chances of any progress towards the adoption of these policy ideas being enhanced by this change of government. However, as John Wiseman writes (quoting from Milton Friedman!), our function is to ‘develop alternatives to existing policies, to keep them alive and available until the politically impossible becomes politically inevitable’. This was certainly true when neoliberal ideas that had remained unfashionable during the long Keynesian era re-emerged in the era of re-invigorated globalized capitalism. Thankfully, the work of the CPD and other progressive research organisations continues to keep progressive alternative ideas alive during this current era of neoliberal policy hegemony.

Get your own copy of Pushing our luck