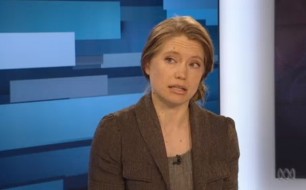 CPD’s outgoing Executive Director Miriam Lyons joins former NSW Liberal leader, now with Barton Deakin, Peter Collins, the economics editor for The Age, Peter Martin and host Julia Baird on ABC’s The Drum. They discuss the recent allegations that Australian navy personnel abused asylum seekers. What would constitute grounds for an enquiry, and does it make sense to vilify the media for not providing clearer evidence, when official channels block access to such information? Staying close to the subject Professor Gillian Triggs believes children in detention is our most pressing matter, Miriam and the panel weigh in:

“The emphasis on getting children out of detention is one that will resonate with most Australians, I think we like to think of ourselves as decent and humane country, we don’t always live up to that impression of ourselves but we don’t like really having our faces rubbed in examples where were clearly not acting responsibly or humanely…

The Australian government has a duty of care for children and it’s not acting like a dutiful carer by effectively having children get brought up in…leaky prison camps on islands, it’s not acceptable”

Watch the episode of The Drum via ABC iView