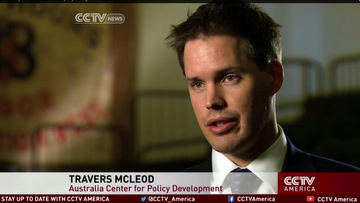 In the lead up to the weekend’s G20 Leaders’ Summit, Travers McLeod spoke to China Central Television America about Australia’s role in combating global climate change.

“The reality is that Australia has been leap-frogged by many other G20 countries in counteracting climate change. We’ve fallen behind the pack, and in many respects are moving away from the pack so far as the overall trajectory of the global economy is concerned.”

Travers comments foreshadowed the US-China agreement on carbon emissions. The agreement will see the United States reduce emissions by 26%-28% below its 2005 level in 2025. China intends to achieve the peaking of carbon emissions around 2030. Both sides intend to continue to work to increase ambition over time.

The CCTV segment can be viewed here.