Op-ed: Weakness And Crisis Lie At The Heart Of Australian Politics | Thought Starters 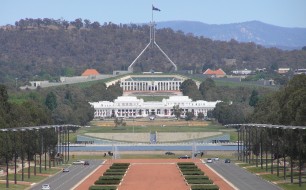 Installing our fifth Prime Minister in five years is not a proud position for Australia to be in. Since 2010, Australia has plunged into a particularly brutal and weak era of national politics in which good governance has given way to survival. The BBC has called Canberra the coup capital of the democratic world.

The volatile and uncertain context within which Australian Prime Ministers currently govern is untenable. Australia is a country in crisis; not because of economic calamity or threatened borders, but because we are entering an era of significant transition but cannot find a steady direction to steer, nor someone reliable to take the helm. The normalisation of political coups and short-lived Prime Ministerships are symptomatic of a country struggling to embrace the big-picture challenges of the 21st century, too timid to upset a faltering status quo.

Immediately following the Global Financial Crisis we were the envy of the developed world. In May 2011, The Economist published an article entitled ‘Australia’s Promise: The next Golden State’. The piece argued that Australia had the rare opportunity of using uninterrupted prosperity to deliver long-term reform and diligently prepare the country for a more complex, challenging future. But the article fatefully observed, ‘they appear introverted and unable to see the big picture. Little legislation of consequence has been passed since 2003’.

We are missing our moment to build the Golden State and it is questionable whether a change of Prime Minister alone is sufficient. BBC Correspondent Nick Bryant released a new book, The Rise and Fall of Australia, cataloguing our national slump. In his synopsis he states, ‘its recession-proof economy is the envy of the world. It’s the planet’s great lifestyle superpower. But its politics have never been so brutal, narrow and facile, as well as such a global laughing stock’.

The causes of our malaise are increasingly apparent. Paul Kelly rightly points to the fact that prolonged prosperity has led to rent-seeking behaviour by corporations and individuals alike, who are determined to preserve their benefits in the status quo and stifle reform. Indeed powerful corporate interests hold immense and unequal sway in Canberra. They ensure our leaders’ timid political response to the long-term issues. There are over 580 registered lobbyists working Canberra corridors, with 185 of these being former Government representatives.

Australia has seen the proliferation of career politicians who are themselves democratic rent seekers, concerned with their survival as first priority because their livelihood depends on it. We have a commercial industry of advisers, detached from the community but connected to the key influencers outside government. As the number of federal political staffers doubled to 590 between 1984 and 2014, the policy rigour of the public service slowly diminishes due to creeping politicisation, budget cuts and accelerated outsourcing.

Our national debate is failing us as well. Al Gore called the problem ‘the assault on reason’. Mainstream, commercial media outlets take either political, ideological or sensationalist grounds in reporting current affairs. They are players in the game, not spectators in the stands. Rarely do we have a logical policy debate on the best evidence available. This makes reform even harder to undertake and understand.

Many polls now demonstrate that Australians feel increasingly detached from their democracy, unable to effect genuine change at the ballot box. In the late 19th century, the US experienced a similar era to our current one, what Mark Twain called ‘the Gilded Era’.

The Gilded Era was a period characterised by a succession of weak, one-term presidents (seven in a row), including a president who lost after one term then won again four years later, eerily familiar to Australian leadership in 2015.

It was a period of immense prosperity for some, mainly the growing family corporations around the country. Progressive reform and social change was stifled. It was a period of sharpening inequality going unaddressed by politicians reluctant to confront corporate influence. The torpor of the Gilded Era ended accidentally, as the assassination of President McKinley allowed the reformist zeal of Theodore Roosevelt to emerge.

We are perilously close to entering the same period. Instead of building the Golden State, Australia is becoming the Gilded State, glittering in flaky gold on the surface masking the dullness at our core.

New leadership does not guarantee reform. Prime Minister Malcolm Turnbull claimed that Australia must embrace a changing world in order to be competitive and prosperous. However. he has already ruled out changes to the Government’s positions on emissions reductions, as well as flashpoint social issues like refugee policy and marriage equality. Moderates on all sides are waiting to see if actions can keep up with the new Prime Minister’s rhetoric.

The Turnbull Cabinet will inherit an economy urgently in need of structural transition and a growing global emphasis on sustainability and wellbeing. We have entered a new, harsh phase of climate change which threatens Australia’s health, food, agriculture, regions and cities. Crucially, our democratic institutions are waning and in desperate need of renewal.

How Malcolm Turnbull opens up the national agenda, and whether he will lead the community towards a golden or gilded future, remains to be seen.