CPD roundtable with Ross Garnaut, Robyn Eckersley and Fergus Green on the path to, and beyond, COP21

On 21 October, CPD was delighted to convene a roundtable between some of Australia’s leading climate policy experts to discuss the state of play as we head towards the 2015 Paris Climate Conference (COP21).

The roundtable was moderated by CPD CEO Travers McLeod, and co-hosted by ANU in Melbourne. It featured contributions from Professor Ross Garnaut (Professorial Research Fellow in Economics, University of Melbourne), Professor Robyn Eckersley (Head of Political Science, University of Melbourne), and Mr Fergus Green (Policy Analyst and Research Advisor to Professor Nicholas Stern), and a broader discussion between a range of academic, business, NGO and government participants. In his presentation, Professor Garnaut emphasised that major developments in projected emissions growth in the United States and China have radically changed the outlook for international negotiations. Emissions had peaked in the US as early as 2007. China’s shift away from investment-led growth and focus on renewables – motivated in part by concerns about air pollution and increased understanding of the longer-term implications of climate change – could see its emissions peak in 2020 or sooner. This radical and sustained change in emissions growth in China made the 2 degree target possible. Together with developments in US, this has established a much more favourable dynamic for international negotiations, and for maintaining momentum toward more ambitious abatement targets around the world.

Professor Eckersley, who is conducting a four-year study into the negotiations shaping the international climate regime under a grant from the Australian Research Council, said that the tone and ambition of ‘Intended Nationally Determined Commitments’ (or INDCs) varied significantly from country to country. While potential flash-points remained, domestic political roadblocks to more ambitious targets were weakening – thanks to the switch in emphasis away from legally-binding commitments, and to growing pressure for stronger policies at home thanks to the ‘show and tell’ process that was happening internationally. The key challenge for the Paris meetings is to design an agreement that can build in upward ratcheting ambition over time – and a review process to ensure that the INDCs have countries on track to meet post-2020 targets.

Fergus Green said the costs and benefits of action on climate change are becoming much more favourable over time – and that this would reinforce more ambitious policies domestically, and therefore greater cooperation at the international level. Recent work at the Grantham Research Institute had found that the vast majority of cuts needed to decarbonise the global economy could be done in ways that deliver domestic benefits that far outweigh the costs for individual countries, even before the risks and costs associated with avoided climate change were factored in. Costs for renewables would continue to shift down over time as their scale expanded and renewables-centered transport and distribution systems grew. There were also major non-climate benefits of action – not only in areas like improved air quality and energy security, but also through opening up new areas of comparative advantage and through the large spillovers associated with knowledge-intensive renewables technologies.

CPD would like to thank the roundtable participants for an excellent discussion, and extend special thanks to Gareth Evans and ANU for co-hosting the event.

To read more from the roundtable participants:

Robyn Eckersley: ‘Anthropocene raises risks of Earth without democracy and without us‘, The Conversation, April 2015. 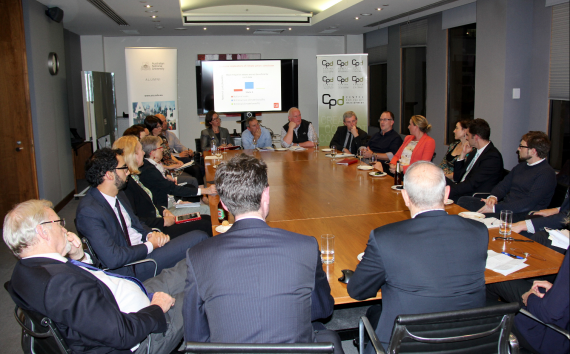 Our Federation and education ...