Who could argue with the fact that mental health is the awakening giant of modern health care?

Awareness is at an all time high and tolerance and stigma have improved dramatically over the past decade. The individual and collective costs of mental ill health are better understood. An array of economic experts, including our own Professor Alan Fels, have confirmed mental illness is the greatest threat among the non-communicable diseases to the Australian and global economies over the next 20 years.

Despite this, mental health care remains relatively flimsy and rationed in a way that physical health care is not. Under-investment has resulted in poor access and coverage. A mere 40 percent of Australians with a genuine need for care receive access to any level of care. Only 11 percent get minimally adequate evidence-based care. Imagine the outcry if only 11 percent of people with breast cancer were accessing evidence-based care.

Cancer care is a perfect benchmark for mental health care. In cancer, we practise prevention wherever possible. We place a huge premium on early diagnosis. Once diagnosed, the full complement of evidence-based treatment is guaranteed and deployed. If sixteen courses of chemotherapy are required to give the best chance of remission, they are provided. Patients are not short-changed. If expensive new cancer drugs are discovered, the government rapidly subsidises them. Patients retain secure tenure in specialist care from initial diagnosis for as long as required. Innovation and research are part of the fabric of cancer care.

Redesigning and resourcing mental health care to deliver all these features would will save lives, transform futures and save billions. But there remains a huge disconnect between the major advances in public awareness and expectation of mental health and the unacceptably poor levels of access, quality and tenure in mental health care. 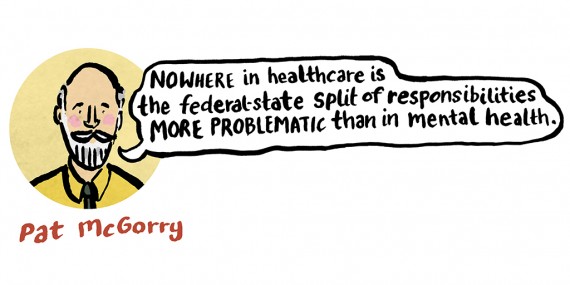 Governments are understandably concerned about exponential growth in health care costs. Investing preferentially in health care is a key part of the solution. We spend just $7.6 billion on direct mental health care, of around $140 billion on the whole health system. This serious under-investment locks many people out of timely evidence-based care.

Investing more dollars in direct mental health care, uniquely in the health system, will result in massive savings across government expenditure. Today’s under-investment creates huge downstream costs — at least $20 billion per annum, including though disability support payments, to people whose lives would have been more fulfilling and contributing had they received expert help earlier. This chronic public policy failure results in an all-too-silent wave of 50 preventable suicides every week, and a vast hidden burden of suffering, disability and premature death through other non-communicable diseases.

Redesign of the mental health system is certainly a key first step, one the government took in November in its long-awaited response to the National Mental Health Commission’s report. The general thrust of this redesign is positive. It contains many features which, for example, made headspace such a success: a devolved model based around enhanced primary platforms, early intervention, stepped care and embedding and streamlining new technologies to support face to face care.

The Federal Government has reimagined the front end of a new vehicle, but it won’t reach its destination unless the whole car is designed and built, complete with more petrol in the tank and a roadmap for where we want to go. This map must safeguard and prioritize evidence-based programs, and a focus on young people and those in the prime productive years of life. These are already working well and can be improved and adapted to other life stages.

Nowhere in health care is the Federal-State split of responsibilities more problematic than in mental health. Care is provided for shorter and shorter periods of tenure within cash-strapped State-funded services for only some of the people with acute episodes of severe and enduring mental illnesses and others in life-threatening circumstances. This system of last resort is a terribly disappointing successor to the old asylums.

Care is also available for milder forms of common mental disorders through Federally-funded, capped programs such as Better Access. But the “missing middle” — hundreds of thousands of Australians with moderately complex or persistent disorders — have nowhere to go. Private psychiatry is financially out of reach for many ordinary people, and often not fit for purpose anyway, lacking flexibility and case-management capacity.

The Federal Government has recognized this problem and rightly seeks to add new expertise and capacity from the primary care end. But solving it requires substantial growth in investment federally, from the States, or both. Instead, weak revenues mean there will likely be a retreat on either side of the divide, threatening hard-won progress — especially in youth mental health innovation.

The new positive tone federally and in several State governments gives us hope that innovation and reform are within our grasp. But we must ensure the awakening giant of mental health is not allowed to tamely doze off again.

Last week Australians for Mental Health, a grassroots organization to give a voice to the 4 million Australians affected by mental ill health every year, held a major launch event in Melbourne to give its verdict on the state of mental health care in Australia. This national voice needs to become much stronger and clearer in its ideas and transformative solutions as we enter another election year in which mental health care must be a dominant focus once again.

If you need help in a crisis, call Lifeline on 131114. For further information about depression, contact beyond blue on 1300 224 636 or talk to your GP, local health professional or someone you trust.

Patrick McGorry is the Executive Director of Orygen (the National Centre of Excellence in Youth Mental Health) and Australian of the Year in 2010.

This is the 11th piece in CPD’s ‘Secret Santas for Australia’ series. Each day we will reveal one ‘gift’ of good ideas from a prominent Australian on a policy issue close to their heart. You can see the full set here.