Travers McLeod: relaxing airstrike rules is a recipe for disaster | The Drum

Calls to relax targeting rules for airstrikes against Islamic State ignore the lessons of our recent past and the fact that a battle of ideas, not body counts, will determine this war, writes Travers McLeod.

Tony Abbott has argued Australia and her allies should relax targeting rules for airstrikes to destroy the Islamic State.

At best, he is ignorant of the lessons of the military campaigns waged in Iraq and Afghanistan since 2001. At worst, he is willing to repeat mistakes to differentiate himself on national security and open a pathway to take his job back.

Let’s assume, for the sake of argument, that Abbott isn’t as narcissistic as the latter reading suggests. Let’s assume he was insufficiently briefed on recent military campaigns or has forgotten the lessons of our longest wars.

The battle of ideas, not body counts, will determine this war. Disproportionate use of force will only inflame and grow the Daesh insurgency. There is no military solution to destroy IS.

“A military force, culturally programmed to respond conventionally (and predictably) to insurgent attacks,” wrote General Stanley McChrystal in November 2009, “is akin to the bull that repeatedly charges a matador’s cape – only to tire and eventually be defeated by a much weaker opponent.”

McChrystal should know. He was commander of the United States-led coalition of forces in Afghanistan from 2009-2010 and headed up US Special Forces in Iraq and Afghanistan from September 2003 until February 2006.

When McChrystal took over as commander he told his troops to “get rid of the conventional mindset”.

We know the prequel. In 2005 the US was accused of being a “lawless hegemon”, one that avoided the laws of war or sought to exploit gaps within it. Commanders misunderstood the battlespace in Iraq and Afghanistan. Their “enemy-centric” mindset harmed civilians and alienated the people. David Kilcullen described US forces as “chasing their tails”.

From late 2006 military doctrine, strategy, tactics and rules of engagement began to shift decisively. Australian military advisers and judge advocates were pivotal in this change of mindset.

Phillip Bobbitt put the new position best in 2010: “The war aim in a war against terror is not territory, or access to resources, or conversion to our way of political life,” Bobbitt wrote. “It is protection of civilians within the rule of law.”

McChrystal’s tactical directive to troops in July 2009 made this explicit. “We must avoid the trap of winning tactical victories – but suffering strategic defeats – by causing civilian casualties or excessive damage and thus alienating the people.”

Losing popular support would “translate into more insurgent recruits, more IEDs, and a prolonged conflict with an uncertain outcome.”

McChrystal prohibited the use of air-to-ground or indirect fire against residential compounds with three tightly-specified exceptions, installed new battle damage assessment requirements, denied capacity for unilateral missions without regional command approval, raised the approval level for night raids, tightened escalation of force procedures and mandated civilian casualty investigations and reporting up the chain of command within 24 hours from any given incident.

McChrystal was clear: “Our success depends on our ability to escalate force proportionally, in a manner that the average Afghan civilian can understand, and respects the fact that this is their country.” 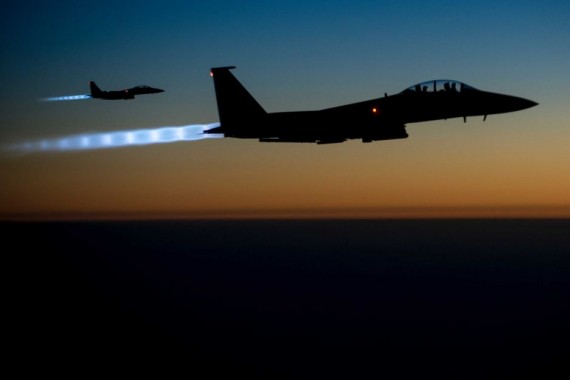 A disproportionate use of force will only inflame and grow the Daesh insurgency. (Photo: AFP: US Air Force/Senior Airman Matthew Bruch)

Successive studies of countering insurgencies reveal that if one loses legitimacy they lose the war. This means one cannot separate the conduct of operations from the broader, contested narrative of a war.

Securing the population and killing the enemy is a necessary condition to countering Daesh. But the chief lesson of the Iraq and Afghanistan campaigns is that the legality of the conduct of those operations is central to their legitimacy.

This is why proportionality has become a watchword for countering insurgencies successfully. It requires a delicate but appropriate balance to be struck between military necessity and collateral damage, in an age when allegations of disproportionality can be uploaded to YouTube and viewed across the world in seconds.

US military doctrine now asserts that “all interactions between security forces and the population directly impact legitimacy”. Complying with the law of war helps to gain local trust – violations “have a direct and significant negative impact on the ability to conduct successful counterinsurgency operations”.

Abbott now advocates “less restrictive targeting rules for airstrikes”. His position may be more nuanced. He may dispute current distinctions between civilians and combatants, including what it means for civilians to participate directly in hostilities. As stated, his position is pregnant with ambiguity.

Such hawkish ambiguity is exactly what Prime Minister Malcolm Turnbull ruled out last Tuesday in his National Security Statement to Parliament. Turnbull called for “calm, clinical, professional, effective” conduct to defeat IS, not “gestures or machismo”. He said “the strongest weapons we bring to this battle are ourselves, our values, our way of life”.

In war the most significant distinction is between civilians and combatants. The latter are lawful targets who can be killed. We water down the distinction at our peril. This is but one way in which our military forces live our (and their) values.

Countering insurgencies, former US Central Command head General James Mattis once said, is only new if “we don’t read our own history”.

Given our focus these past weeks on France, it’s worth recalling that the best-known military theorist and practitioner of counterinsurgency was French. Lieutenant Colonel David Galula’s formula was simple: win the support of the people. “Antagonising the population will not help,” he wrote in 1964, “rash actions on the part of the forces should be kept to a minimum.”

An ad-hoc legal approach to fighting terrorism would return us to the fog of law within the fog of war. It is a recipe ripe for disaster.

This article first appeared on The Drum.