Australia’s population has recently hit the 25 million mark, a milestone reached decades earlier than expected. In Victoria, the City of Wyndham had the second largest percentage increase in population of all Local Government Areas in Victoria, adding over 62,500 people in 5 years. Some people are conflicted about whether Australia’s population should continue to grow at all. There are tensions between the various dimensions of ‘sustainability’, significant implications for economic growth and concerns around community cohesion and wellbeing. A forward-looking integrated population policy might offer a way to be prepared to respond to the current and future needs of Australians. So, what would a good population policy look like and how can Australia turn demographic challenges into opportunities?

On 27 September 2018 CPD and ANU hosted leaders from government, business, civil society and academia to consider some answers to these questions.

This event was hosted by ANU Chancellor and former Foreign Minister, the Hon Gareth Evans AC QC and was moderated by CPD CEO Travers McLeod.

Peter McDonald opened the discussion with an overview of recent migration trends. He explored an approach to international migration that is responsive to short- and medium-term labour demand – while optimising the impact of immigration on population ageing. He also touched on the idea of the regional settlement of migrants arguing that, ironically, reducing international migration to the large cities would make it harder for the regions (including Adelaide and Hobart) to maintain their populations. Peter also shared some insights into the priorities of the new Minister for Cities, Urban Infrastructure and Population, Alan Tudge.

Kelly Grigsby built on these remarks by providing the perspective of one of the fastest growing councils of Australia, Wyndham City Council. She spoke about the policy shift the Council would like to see and the policy framework they are working on. She emphasised how Australia’s fast-growing outer suburbs play a vital role in supporting capital cities and regional Australia since they provide housing for much of the workforce that drives CBD economies and growing economic activity to support national productivity. She also touched on game-changing activities at the local government level around job creation and gave a sense of what it can mean for a Council to become a master of their own destiny. 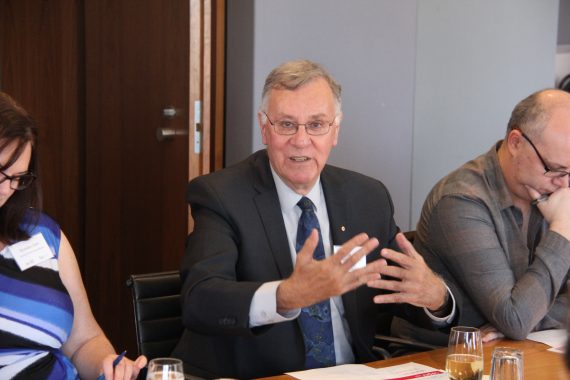 CPD would like to thank Gareth Evans and the team at ANU House for hosting the event, and all the participants who contributed to another engaging ANU-CPD Policy Dialogue.