Follow the links for CPD’s reports, papers and publications and other coverage of CPD’s work and that of our fellows.

For all media enquiries, please contact us at [email protected] The events in Afghanistan have left many of us sick in the stomach. CPD is calling on the Australian government to accept 20,000 Afghan refugees in addition to its normal humanitarian resettlement intake. A special roundtable convened by the Centre for Policy Development found that proactive and engaged governance of climate-related risks is even more important as businesses and investors swing behind a more ambitious net zero agenda. A new report released today by the Centre for Policy Development (CPD) finds that Australia’s criminal justice systems create and compound disadvantage at escalating costs to children, communities, and governments. Local responses the way forward: A new Blueprint for Regional and Community Job Deals released today by the Centre for Policy Development (CPD) shows how Australian communities, governments and businesses can respond proactively to the increasing number of Australians facing entrenched unemployment as a result of COVID-19. Now is the moment to put language in place: Reimagining the Adult Migrant English Program The Centre for Policy Development (CPD) welcomes the release of “Investing in Refugees, Investing in Australia”, the findings of the Review into integration, employment and settlement outcomes for refugees and humanitarian migrants to Australia, chaired by Peter Shergold AC. 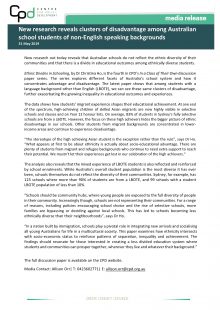 New research out today reveals that Australian schools do not reflect the ethnic diversity of their communities and that there is a divide in educational outcomes among ethnically diverse students. New research from the Centre for Policy Development (CPD) and the Open Political Economy Network (OPEN) shows that refugees are Australia’s most entrepreneurial migrants and are nearly twice as likely to start a business as Australian taxpayers as a whole. It outlines how a modest investment and strategically targeted support could deliver big economic, fiscal and social benefits for local communities, refugees and their families, and Australia. Today the Centre for Policy Development (CPD) released an update of a landmark 2016 legal opinion on how Australian law requires company directors to consider, disclose and respond to climate change. The supplementary opinion, provided by Noel Hutley SC and Sebastian Hartford Davis on instruction from Sarah Barker at Minter Ellison Lawyers, focusses on five material developments since their original 2016 opinion. A new assessment from the Secretariat of the Asia Dialogue on Forced Migration (ADFM) highlights the significant and intensifying risks of Rohingya displaced in Cox’s Bazar, and Bangladeshi nationals living in the area, falling victim to human trafficking, migrant smuggling and related exploitation. Speaking at a CPD public forum, Dr Debelle said that climate change means that the weather now changes in “trend(s) rather than cycles” and that “both the physical impact of climate change and the transition are likely to have first-order economic effects.” Australian schools and scholars increasingly divided, with growing numbers of high achieving students in the most advantaged schools

New research from the Centre for Policy Development (CPD) reveals that Australia’s school system is increasingly separating and dividing students by advantage and achievement. Global Compacts provide opportunity for improving regional responses to managing refugees and migrants at risk, including the Rohingya

Following the seventh meeting of the Asia Dialogue on Forced Migration (ADFM) in Bangkok, Thailand, last month, ADFM Co-Conveners have called on states to take more coordinated and sustained regional action to support the Rohingya population displaced in Bangladesh and Myanmar, and to find alternatives to child detention.

Background on the meeting It’s time to rethink the role of the state, public value, and finance: Mariana Mazzucato headlines Menadue Oration at Carriageworks

Renowned economist and author Mariana Mazzucato is visiting Australia this week as a guest of the Centre for Policy Development (CPD), to kick-start a conversation on rethinking the role of the state and innovation-led growth.

Background on the event More Australian companies are considering in detail what the Paris Agreement on climate change means for their business strategy, but serious deficiencies in consistency and quality remain in modelling impacts of climate change and responses to it, concludes a report released by the Centre for Policy Development (CPD) today.

Background on the report and event The Asia Dialogue on Forced Migration (ADFM) concluded its sixth meeting in Sydney, Australia, this week ahead of the ASEAN-Australia Special Summit. The meeting focused on the humanitarian crisis in Bangladesh and Myanmar; efforts to address human trafficking, forced labour and modern slavery; and principles for sustainable and protection-sensitive repatriation and reintegration pathways. Australians want their democracy to be fit for the ages

A discussion paper released today by the Centre for Policy Development (CPD) concludes Australians have an appetite for democratic renewal and substantial policy reform. Not only that, they broadly agree on the way forward.

The paper, “What do Australians Want? Active and Effective Government Fit for the Ages”, draws on a detailed survey of Australian attitudes to democracy and government. It is also informed by input from about 30 eminent Australians from diverse backgrounds who gathered in Melbourne last month for a special roundtable on democracy. Rigorous planning for the financial and economic impacts of climate change is vital in Australia, where climate risks are profound and climate policy is behind the curve.

Climate scenario analysis is the subject of a new discussion paper called Climate horizons: next steps for scenario analysis in Australia, released today by the Centre for Policy Development (CPD). It comes four months after the Financial Stability Board’s Taskforce on Climate-related Financial Disclosures (TCFD) recommended scenario analysis be used by companies to model the impact of different assumptions about climate change and climate policy on their business. Australia and Indonesia, the Co-Chairs of the Bali Process on People Smuggling, Trafficking in Persons and Related Transnational Crime, have been asked by regional experts to fulfil a promise made after the 2015 Andaman Sea crisis by responding quickly to the refugee crisis in Myanmar and Bangladesh Australia’s education system is riven with inequity and disadvantage due to a failed funding model, argues a new report released by the Centre for Policy Development.

Losing the Game: State of our schools in 2017, by CPD’s Education Fellows and former school principals Chris Bonnor and Bernie Shepherd, analyses My School website data to demonstrate major deficiencies in how we invest in schools. It follows their seminal 2016 CPD report Uneven Playing Field: The State of Australia’s schools. CPD welcomes today’s announcement from the Federal Government regarding its Quality Schools reform initiative as well as the commissioning of David Gonski AC to chair a review into achieving excellence in Australian schools. We also look forward to shortly seeing more detail on the plans outlined.

Since the original Gonski Review in 2011, CPD’s Education Fellows, Chris Bonnor and Bernie Shepherd, have been advocating for Australia’s school system to urgently move to a needs-based, long-term funding
model that is blind to school sector. This was encapsulated in our 2016 report Uneven Playing Field: The State of Australia’s Schools, where CPD called for a revitalisation of the Gonski reforms, including a recommitment to needs-based school funding and the introduction of a National Schools Resourcing
Standard. The Australian Prudential Regulation Authority has today made clear that climate-related risks are financial as well as environmental in nature, and that the financial markets regulator is focussed on potential system-wide
impacts of climate change.

“While climate risks have been broadly recognised, they have often been seen as a future problem or a nonfinancial problem” APRA Executive Board Member Geoff Summerhayes said in a speech in Sydney. “This is no longer the case. Some climate risks are distinctly ‘financial’ in nature. Many of these risks are foreseeable, material and actionable now.”

Read more about the speech here The Asia Dialogue on Forced Migration’s (ADFM) conveners commend the decisions made by senior officials and representatives of member states and organisations of the Bali Process on People Smuggling, Trafficking in Persons and Related Transnational Crime, to step up operational coordination, leverage joined up regional  expertise, and build partnerships with ASEAN. The ADFM’s conveners believe these reforms will be critical
improvements to the way the region responds to mass displacement of migrants.

Read more about the ADFM here

Bali Process steps up, but action on forced migration will be critical  23 March 2016.

Responding to North Korea: in conversation with the Hon Michael Kirby and the Hon Gareth Evans – October 2016, Melbourne.

Cross-continental roundtable on settlement services for refugees – with the Centre for Public Impact – August 2016, Melbourne.

The view from 2030: getting the budget right for the long term, roundtable with Peter Whiteford, Greg Smith and Janine Dixon – May 2016, Melbourne.

For research, insights and opinions from CPD’s fellows, click here.